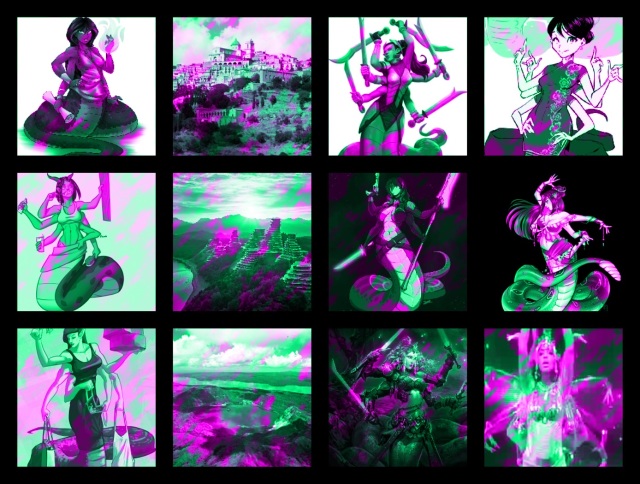 Far from the human settlements lives a secluded community of mariliths, extraordinary beings with strange anatomy but an ultimately human nature. Marilith men and women have six arms and the lower portion of their body is a snake, without legs. They are somewhat short; though their tail gives them a body length of about 3 meters, they rarely stand more than 160 cm tall. Due to isolation many humans still view them as some kind of war-like demon when in fact they go about their lives just like regular people.

The seclusion from the world of humans comes from living high in the mountains, where they prefer to live near warm equatorial extinct volcanoes. Although not cold-blooded they enjoy basking in the sun, and much of their architecture allows for sunroofs; a marilith home can seem less like an apartment and more like a greenhouse.

In addition to gardening, many mariliths take up fencing as a popular hobby, a hold-over from an antiquity full of warfare. Nowadays they almost always only practice with rapiers designed for sport rather than mercenary work.

Mariliths, like regular people, have varied interests and may work any profession. While some are dancers, often known for their exotic silver-decorated outfits, others are business owners, restaurateurs, or machinists – really any profession at all. As a society, mariliths are often humble traditionally-minded people who simply have limited interest in spending time around humans – or at least most of the humans that occasionally come up the mountain to bother them.