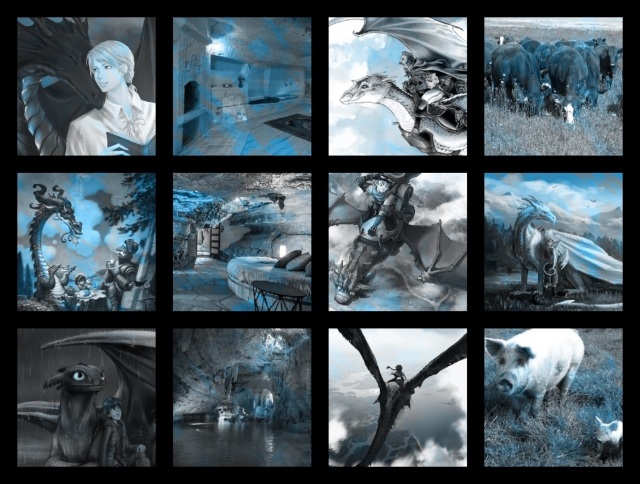 Since the establishment of dragon civilization, dragon-kind began at first with a tenuous relationship with humans.  While dragons built their towns and cities, humans regularly encroached into them, almost as a kind of vermin.  In different parts of Europe, at least, dragons eventually made pacts with the intelligent humans – pacts eventually became treaties, treaties became culture, and cultural habits created friendships.  Humans now live alongside dragons, and in many cases dragons see humans as indispensable companions.

The integration of humans into dragon-kind’s lives changed the nature of their architecture and homes.  As dragons rarely grow much larger than a draft horse, most dragon caverns and caves are built so that they could allow for the habitation and co-habitation of both dragons and humans in the same space.  Furniture that both dragons and humans can use are often couches and beds, with chairs being absent, replaced with sitting pads at mid-height tables.

Compared to a dragon’s strong claws human hands are better suited for dexterous skilled work, but dragons are more mobile.  A collaborative team forms in the way of courier pairs, and in the aerial transportation of skilled workers.  Often a dragon is only large enough to fly with a single rider, who is more than happy for the exhilaration of flight.

To accommodate dragons’ appetites, the human technology of agriculture has been overseen by dragons for increased production.  Large livestock, such as beef and hogs, are more common, and this skews both land and resource availability compared to other worlds: a human needs roughly one tenth as much resources as a dragon does in square kilometers and metric tons of food and water, so the total population of both dragons and humans is substantially higher (higher than an all-dragon population, lower than an all-human population) and more devoted to large farm areas.  Thus, many dragons live in nice caves or large farm houses with a half-dozen humans near a ranch where they work to raise livestock on a large area of land patrolled from the air by dragon-back.